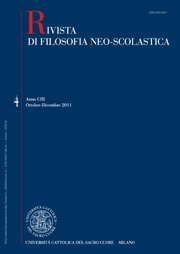 | RIVISTA DI FILOSOFIA NEO-SCOLASTICA - 2013 - 3-4
Anno: 2013
Readers of the immense bibliography written on Kierkegaard and his pseudonyms are well acquainted with the number of recent, and former, attempts to reduce the multiplicity of authors, styles and topics of the Danish philosopher’s production to some type of unity. I begin by summarizing the main arguments of a curious example going in that direction. The second part of my essay deals with diversity and heterogeneity in Kierkegaard’s works in their opposition to such reductionist attempts, and the last section puts forward a concept of singularity that will hopefully shed some light on how to deal with the plurality of problems of our author without recurring to artificial unifying procedures. Keywords: diversity, heterogeneity, multiplicity, singularity, universality, hermeneutic procedures
€ 6,00